Weekly interview / Mustafa Nano: For me, life has a purpose 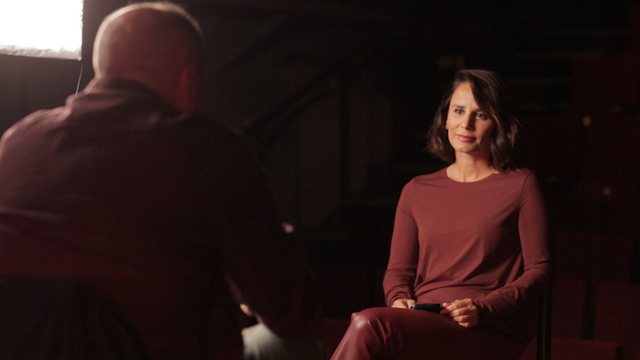 He is back with another 'One Man Show', "The sun rises from the west". Thus, the journalist Mustafa Nano has decided to talk about the West and Europe, those two continents of freedom that Albanians want but cannot live.

In an interview with Mira Kazhani for Tiranapost comes an original story which contains some current questions and answers.

Mira Kazhani: "One Man Show" is a phrase that comes from English. If you go in to see the Albanian translation, but also the English explanation of the meaning of this phrase, you realize that it has to do with someone who manages everything himself, who manages everything himself. Such is the "stand up" that Mustafa Nano does, 3 times already. It will be this weekend in the capital. Always with provocative topics, but what I want to understand from Mustafa Nano, from Muçi, is what feeling is when he controls everything himself? Where are you solo? We like solo as a society, in general.

Mustafa Nano: As a society yes, solo. Albanians are individualists. It is a characteristic of ours that everyone has noticed. While regarding 'stand up' it does it all. I do not know, I was from the beginning, when I started dealing with public activities (we call journalism public activity) I did an individual thing, as we journalists do. We do individual work generally.

Mira Kazhani: We used to be more of a team, but now we have all become "One Man Show".

Mustafa Nano: I have never tried to be part of the team. When we were together at Shekulli, even there I just did my writing and left. It’s not that I was part of the team. While yes, it is true. You have tried to be part of the team as well. Then over time I have done more and more individual work. I worked mostly at home and this has been my lifestyle. So I have not made any strong, qualitative or dramatic leap in my life, doing a ‘stand up’ that I do it all myself. I'm used to doing it all myself all the time. Then I even enjoy it. 'Stand up' has the text and I like to do the text, that is, I can not leave it to someone else. I am the man of the text. This then has the interpretation on stage. In stage performance I try to be myself, because people come into the hall not to see Muç Nanon how he will act, but to see Muç Nanon what he says. In this sense I have no suffering that can come from the overwhelming strain to interpret something. I try to be myself.

Mira Kazhani: What does it feel like to be the only one on the show? For example, I know why I want to understand, that if you notice it in politics, we are going to the "One Man Show". Even economically, if you look, we have a "One Man Show". Culturally, culturally and socially, if you look at social media they have turned everyone into a "One Man Show" and there are very few spectators, but we need spectators. However, how do you explain in a short analysis, this temptation, this attractive force of "One Man Show", of the character who does it all himself?

Mustafa Nano: In addition, I want to dwell on the relationship with the spectator, it is a relationship that I did not know before doing a "stand up". It is a magical relationship. I was told by the actors, but I remembered that they exaggerated and exaggerated to make their work a little magical. The first time I did the show (you were at the Academy of Arts theater), I was behind the scenes twenty minutes before the show started. I was just at the stamp people were coming in and I got an emotion. I was afraid that that emotion would turn into a blocking emotion. And I said: Boo bo I got dirty. But as soon as the curtain opened and I came on stage, that spectator lit me up. The hall was almost full. Since that hall has over 600 seats. There were people even upstairs in the gallery. She lit me up too. I was overwhelmed by that show and I had no problem. Imagine being alone and communicating with an audience, but not an audience you find on the street, of a random nature, no. It is an audience that has come to Castile to listen to you. That is what politicians do in a political rally.

Mira Kazhani: I want an explanation for that "One Man Show" in politics. It is important because it is not very western. It's what worries you.

Mustafa Nano: There is also a "One Man Show" in the west. Done, Trump is a show man.

Mira Kazhani: They can't stay for more than 8 years.

Mustafa Nano: For that yes. But while in power all their public behavior is the behavior of a "One Man Show". They are 8 years old, I am an hour and a quarter today, I am on my show, I even leave home. They are all the time. The American president in general. Now it is coming from here, it is also coming to Europe. The Italians took Berlusconi as a model. For the Germans it was Merkel. Merkel was also a bit of a slave who broke tradition. It was "One Man Show", because it was in the focus of everyone, she was called the most important woman in the world, because in Germany it is. But it was a "One Man Show" that dominated the audience with a different behavior. Not with exaggerations. He was not a "flamboyant" as the Americans say. She was calm. He is a strange character. Merkel has always intrigued me.

Mira Kazhani: Does yourself or society create such a leader, calm?

Mustafa Nano: Society. Leaders are just as society wants them to be. It comes to our political leaders, if they were like in Germany they would be political leaders with a very small electorate, or they would have to adapt, they would have to be different. Berisha, Rama all of them. It is society. Even the evil vices that they take and manifest, make it clear that some vices do not have their own, but they take it simply because it works with the Albanian society. The word comes from the use of violent language. A politician may not have his own formation, but he uses it because Albanians have respect when he manifests violent, arrogant behavior.

Mira Kazhani: Do you think this is something that comes out in the polls? For example, do Albanians like to hear this kind of communication format? Ok, I admit it could be that too. But whose responsibility is to develop society? Because society has a shepherd. A "One Man Show" in the sense of some characters or of civil society or of teachers in schools, of educators in kindergartens. There is one thing that we can not blame the society that determines the fate of leaders and politics.

Mustafa Nano: It is not fair to focus too much on the guilt of society, but it is true to say. Society has responsibilities everywhere, not just us. Kudo. That's what I just said. Political leaders are the way society loves them. It is not our politicians who conduct polls to find out what vices Albanian society accepts the most.

Mira Kazhani: No, no, they do surveys, I think they do.

Mira Kazhani: How do you explain that in the polls Albanians when asked are 90% European, 100% you wanted Americans. They love him very much, we only talk about them. We say we want them, but in reality we do not behave like Europeans or Americans. This is a paradox.

Mira Kazhani: Did you find the topic for the next "stand up"? That next year? Apparently it will be young people.

Mustafa Nano: Yes. Once in three years I do.

Mira Kazhani: I wish you many successes in the next "One Man Show" Mustafa Nano! I will be a spectator. Personally I believe that being a spectator today is very important because you understand what is happening around you; so you don't get them all from the One Man Show, some have to be spectators.

* The interview is not allowed to be republished without the permission of the editor. Any reproduction and misinterpretation of the article will be prosecuted.

The attack on globalization is a mistake!

Fabrication of dirt of the opposition! Rama responds to the attacks after the NY Times article